Do animals need a job? Ry would argue that his job is to look handsome (and pretty), and keep himself clean. Amy, on the other hand, thinks EVERYTHING is HER job and she needs to be the best she can be at it. Such an overachiever. She’s even the best sleeper.

Like people, different animals have a different concept of the word “work”.

I think it’s more about whether or not they feel useful. Ry is very useful, even in his role as pretty/handsome/clean. He is a constant source of joy in my life. Right now, he’s laying next to me on the couch, after having spent some time making sure every hair on his tail was in exactly the right place. This is pretty exhausting work, so he’s taking a little nap. Here he is: 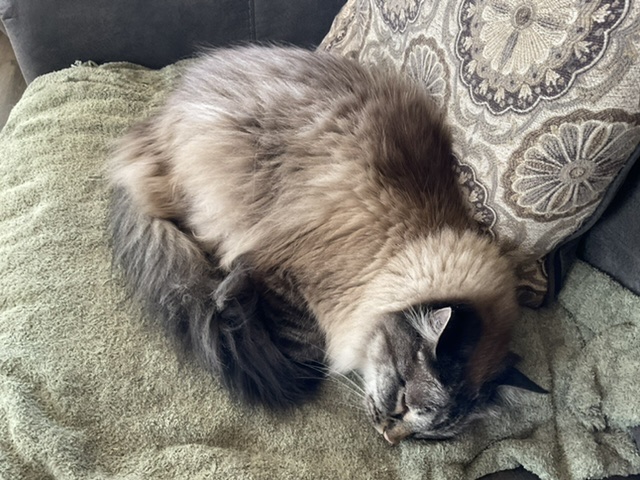 Is he not the cutest? Okay, okay, I’m partial.

Amy had a very busy morning making sure I did the horse chores correctly, and then she spent some time holding down a few blades of grass outside the barn waiting for me to come back out, and then she walked me back up to the house, and THEN she harassed her brother Niko for a while, and then the three doggy amigos patrolled the property (prompted by Amy) to make sure nobody could get in (or out), and THEN it was time to come in the house, have a drink of water (very important), and take a little siesta prior to the next bout of activity later on today. Amy likes to fill her days with tasks. 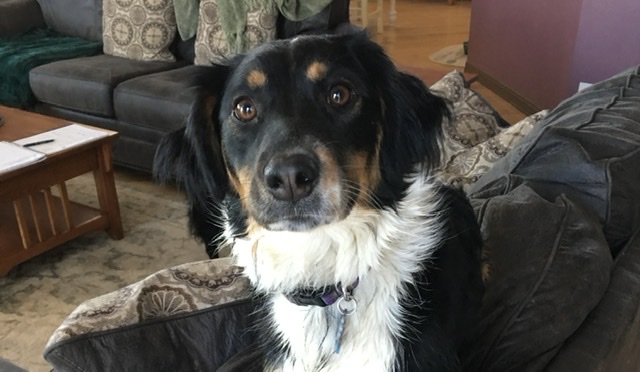 I’ve rearranged the furniture - how do you like it?

Some animals love to have a job; some do not. Some can’t do what they started out doing - we had a horse a number of years back who had been a roping horse her entire life. She defined herself by how fast she was, and how quickly she and her partner could get the steer or calf down. As she aged, she wasn’t as fast, and her partner eventually sold her on (not to us). She changed hands a few times before she came to us.

She was such a sad horse, because she felt like she couldn’t do what she was supposed to do, which was be fast. She told me she was never fast enough, even at her fastest. She was always told she had to go faster. So she had a real mental block about her usefulness. She was a lovely horse, gentle, kind, with a heart that would try for you all day long - and it was never enough for the people who had her - until she came to us. We saw past the performance. We saw her lovely disposition and how sweet she was, and how hard she tried to do the right thing, even when she wasn’t sure what that was. We told her it was okay to be who she was in this moment. She didn’t have to be a riding horse, she didn’t have to be a speed horse. We wanted her to be herself, Willow, loving companion. It took her a few years, but she figured out that we loved her for who she was, not what she could do. 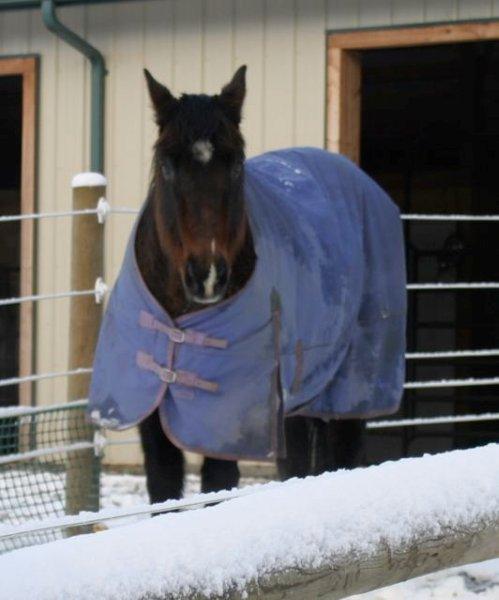 She spent seven quiet, happy years with us, and when she passed on, she did so with dignity. I just heard from her the other day, as part of a class I was doing, and she said she is on the other side, helping other animals transition. She loves her work. She has no desire to come back to this dimension. I am so happy for her.

We appreciate every one of our animal friends for who they are - if they want to be busy, like Amy, we give them stuff to do (her favorite thing in the world is to jump up on the mounting block, a trick she learned as a puppy). If they are decoration, we let them be decoration. If they don’t want to be ridden (as LiLi has told me in no uncertain terms), then they don’t have to do that. She would rather coach, and sometimes she just wants to be a pasture ornament. It’s all okay. 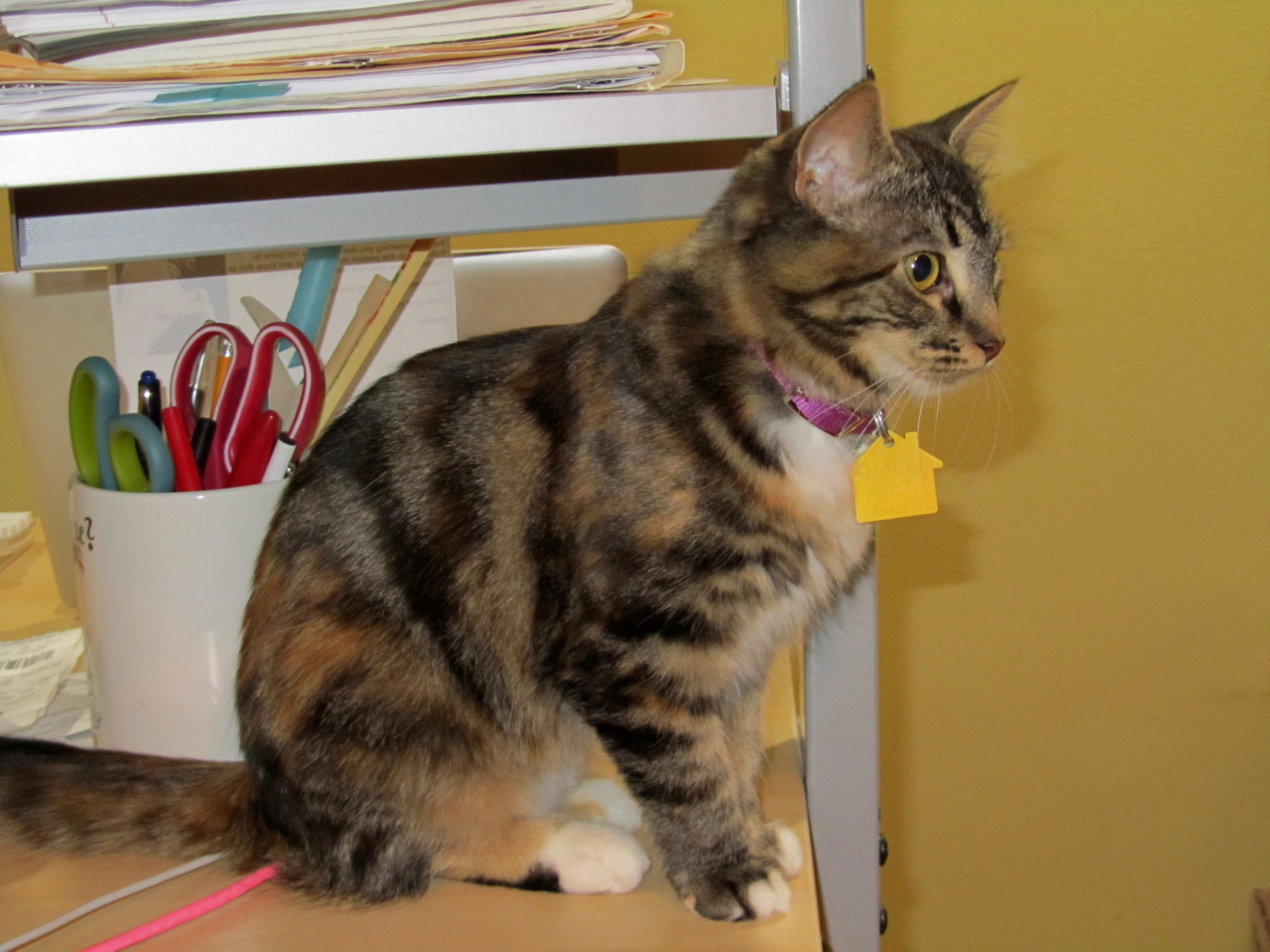 Torbi the Terrible (to mice and voles)

Let your animal friend be who they want to be. If they want to work, let them work. If they bring you “presents” (Torbie often brings home voles and mice to show us how much she loves us - bloody little bodies, and she is so proud of herself, all six pounds of lethal kitty), thank them sincerely. If they want to snuggle up, accept that snuggle in the spirit in which it is given - with great love and affection. Because THAT is their work. THAT is their soul’s purpose.

We humans should be so lucky, to know so clearly what our soul’s purpose is. And we can take a lesson (many, actually) from our animal friends - that it is okay to “be” - no matter what our contribution is. What we may think is a small life is really the biggest life imaginable. Whether you’re the CEO of your own company, a celebrity, or a crazy cat lady, it’s all purposeful work.