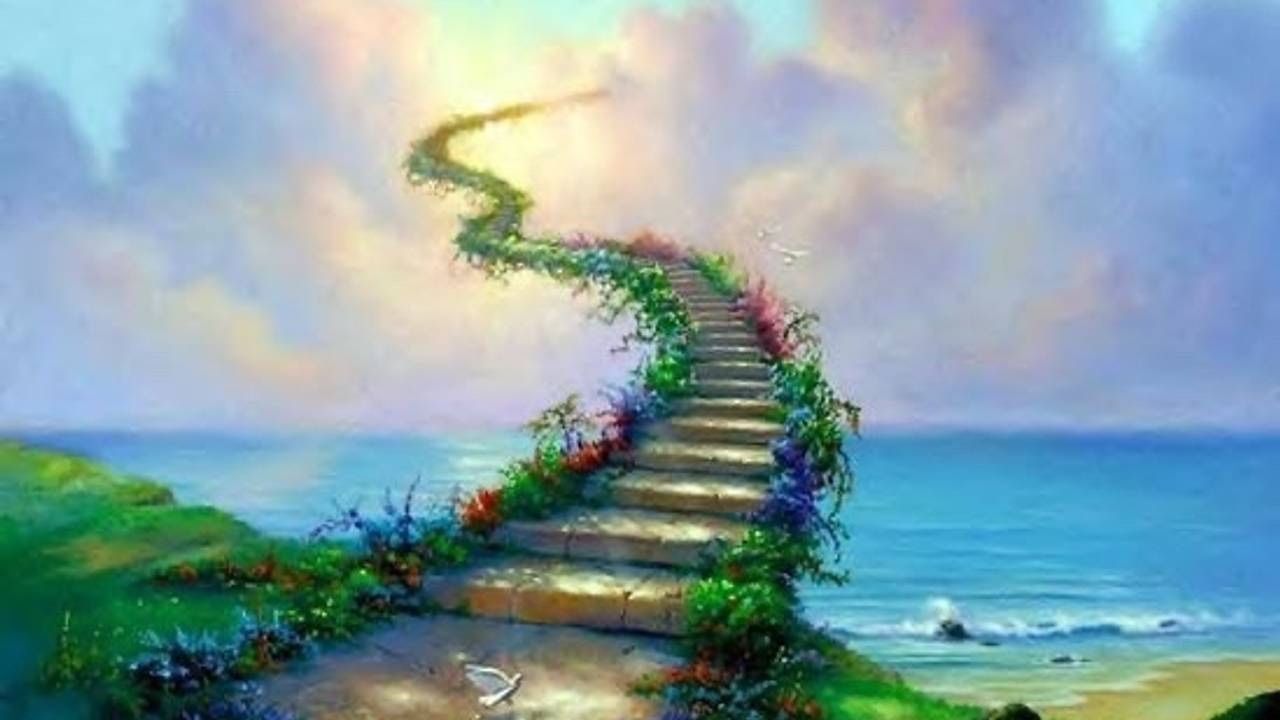 Everyone who has a beloved animal friend knows what the Rainbow Bridge is. It's the thing our animals go over when they leave their physical body. Maybe we humans do it, too, but from what I've heard and read, it looks more like a bright light to us ("Go to the Light!").

I've sent my share of animals over the Rainbow Bridge. Most of them were unplanned - my beloved Wilma was sick and gone within four hours (she was quite direct about all things). Others were a welcome relief to the animal in question, and I always made sure I had someone besides me talk with the animal before calling the vet. I may be an excellent animal communicator, but I still can get tied in knots about my own furry family. 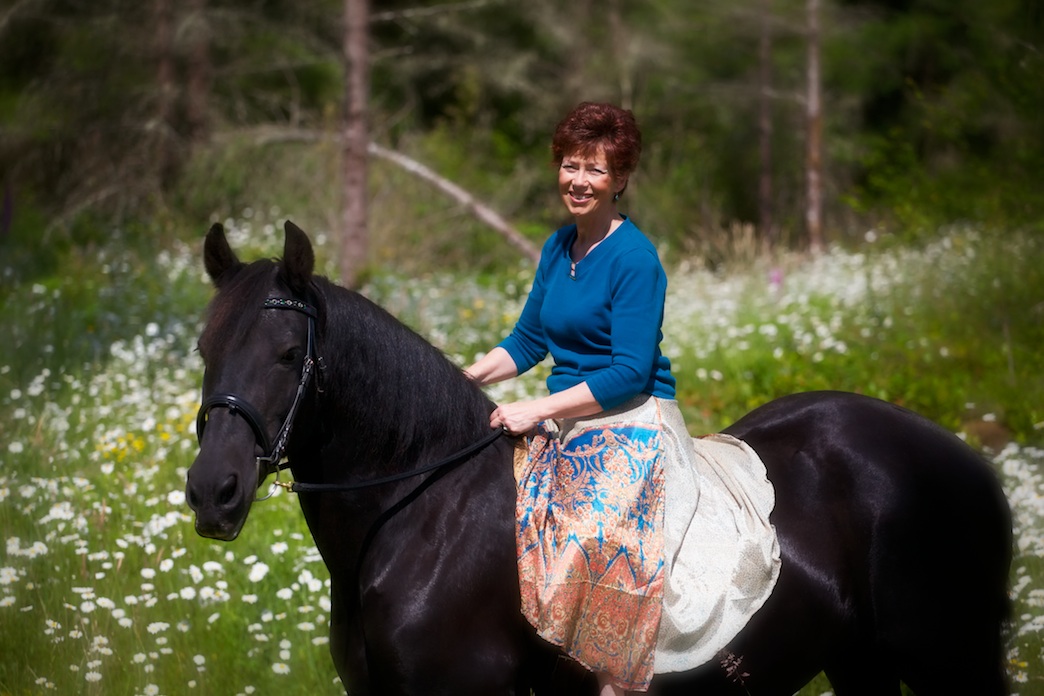 My beloved Wilma. I miss her every day.

When my mentor, Joy Turner, passed away, she gave me her business - and her horses. Three of them came to live with us here in Colorado, and the fourth stayed in Washington, to become a riding horse. He has a lot of talent, and it would have been wasted sitting in one of our pastures. Plus, it's what he wanted. He is living a great life.

Of Joy's three horses, one remains - Tango. He is thriving with us. The other two, Ala and Dream Weaver, were very connected to Joy and while they tried hard to integrate into life in Colorado, it isn't where they wanted to be. They hung in there for about a year. Then Ala let his intentions be known very clearly that he was ready to move on. He started choking on nothing, and went downhill fast. To Dream, Ala was her lifeline, and he wasn't going anywhere without her. 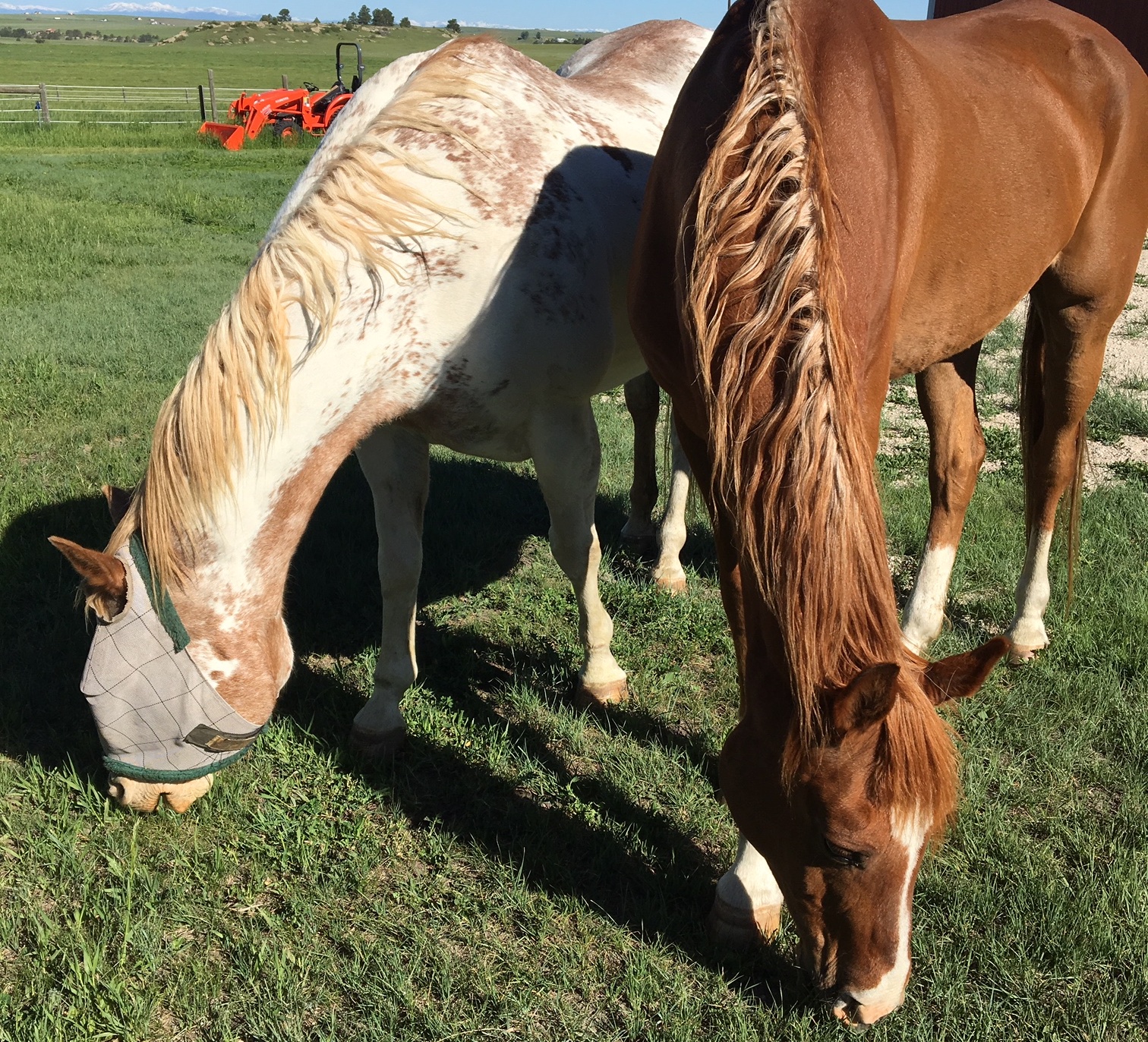 Dream Weaver (we called her L'il Sis, at her request) and Ala

The day we had them put down was sunny and warm. As they were released from their bodies, I had the distinct impression of them kicking up their heels and galloping (not going to hang around here any longer than they had to!) across the Rainbow Bridge to meet their dear friend Joy, and her dog Logan, who passed not long after her. I could feel it all. It was a happy/sad day, and I know they are all cavorting together, totally enjoying one anothers' presence.

We now have another gentleman to send over the Rainbow Bridge - Declan. Declan came to us about five years ago as a foster from a horse rescue. He had been plucked from the kill pens, and was supposedly 18 years old. We were hoping he might be rideable, that his lameness was temporary, but that was not to be. He never became sound, but it didn't matter. We adopted him, and he became part of our healing herd. His lameness wasn't too bad, and we gave him supplements that helped lessen "the gimps". 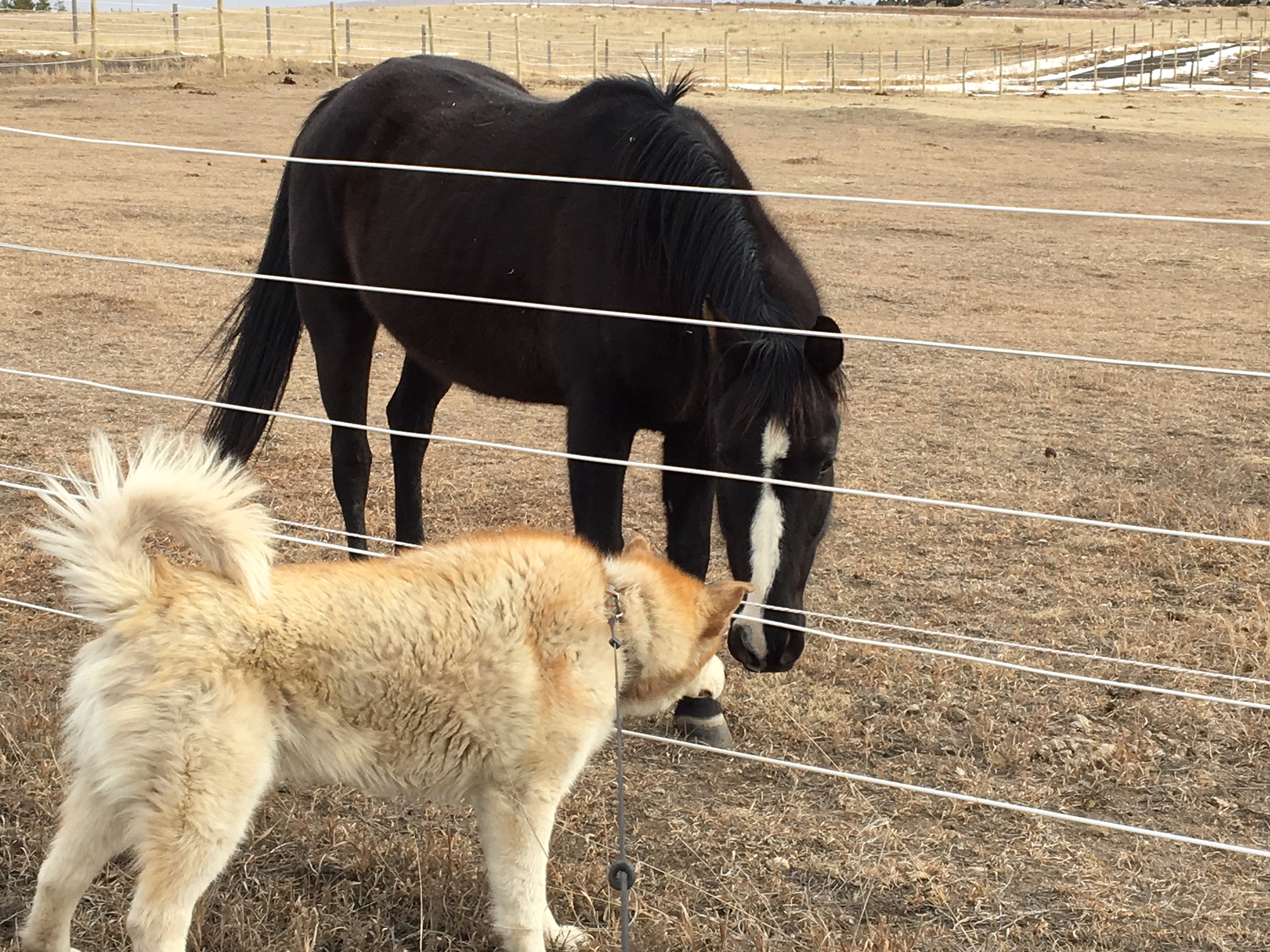 Declan shortly after coming to live with us, meeting brother Niko

We don't know what breed of horse he is - maybe some Arabian in there, because he always lifts his tail when he moves. He loved to gallop across the back field (not any more). He is very handsome, and is a super coach. His superpower is helping people establish boundaries, and he loves to cuddle and hug those who need it. 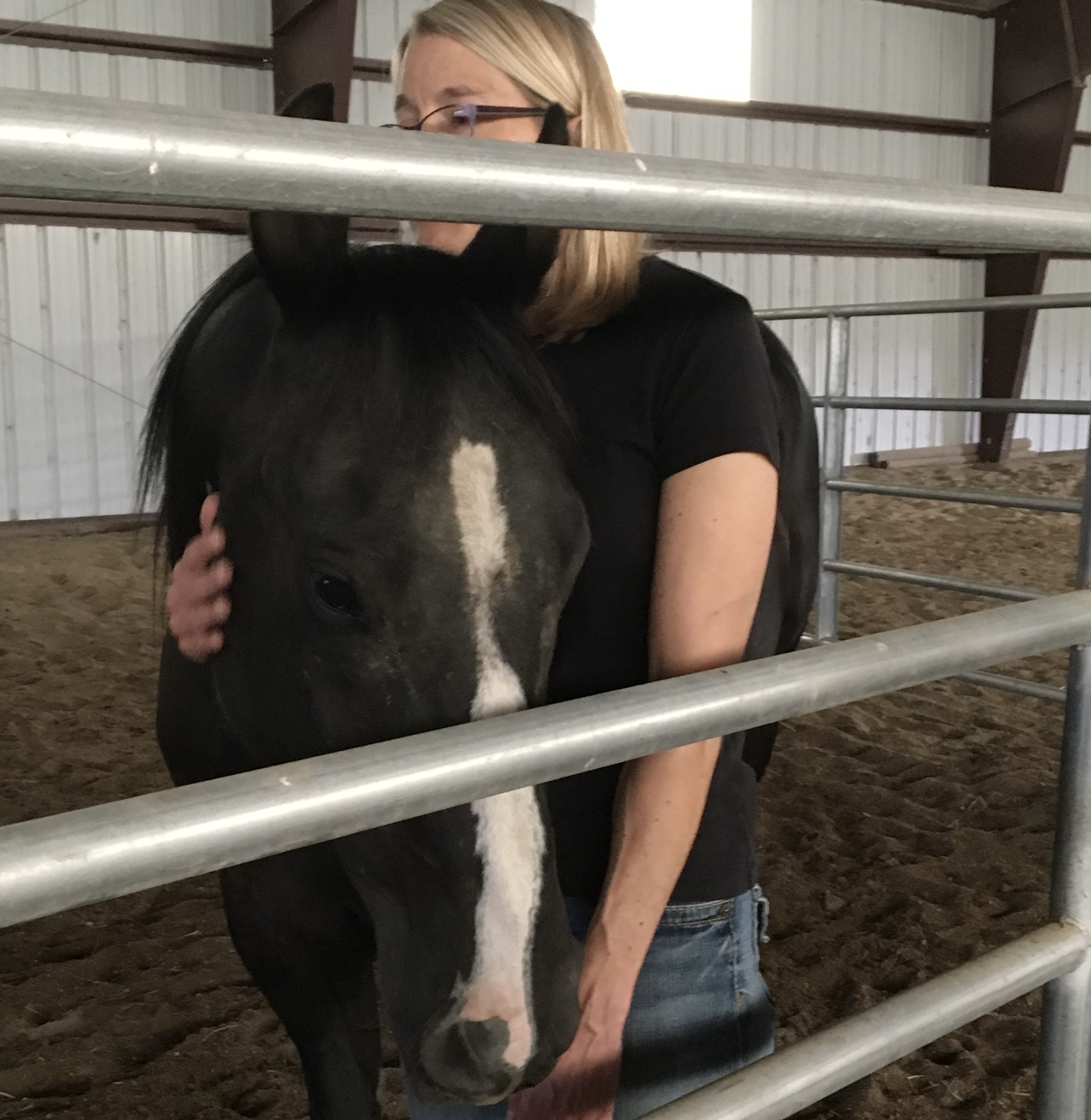 Lately, though, he's shown little interest in coaching and his limping has become quite bad. Supplements are no longer helping. His hips hurt, his shoulder hurts, all four feet hurt, especially the fronts. He feels sad. When questioned, he said he's ready to go over the Rainbow Bridge, if we are ready to send him. It's a tough, tough decision. Right now, he's stable, and while in pain, can still get up and lay down on his own. His eyes are bright, although somewhat inward looking. He cleans up his food. And - he's done. We want him to pass with dignity. We made the appointment.

By the time most of you read this, Declan will have crossed the Rainbow Bridge. My hope for him is that he will have passed easily, as all the animals before him, and that he'll leap to his spiritual feet and gallop over that bridge to meet whatever his next, best destiny is, tail flying, head up, ears pricked. We will miss him in our herd, his sweet nature and willingness to try anything. I've asked Joy to greet him. She's great with new arrivals, and will show him the ropes. 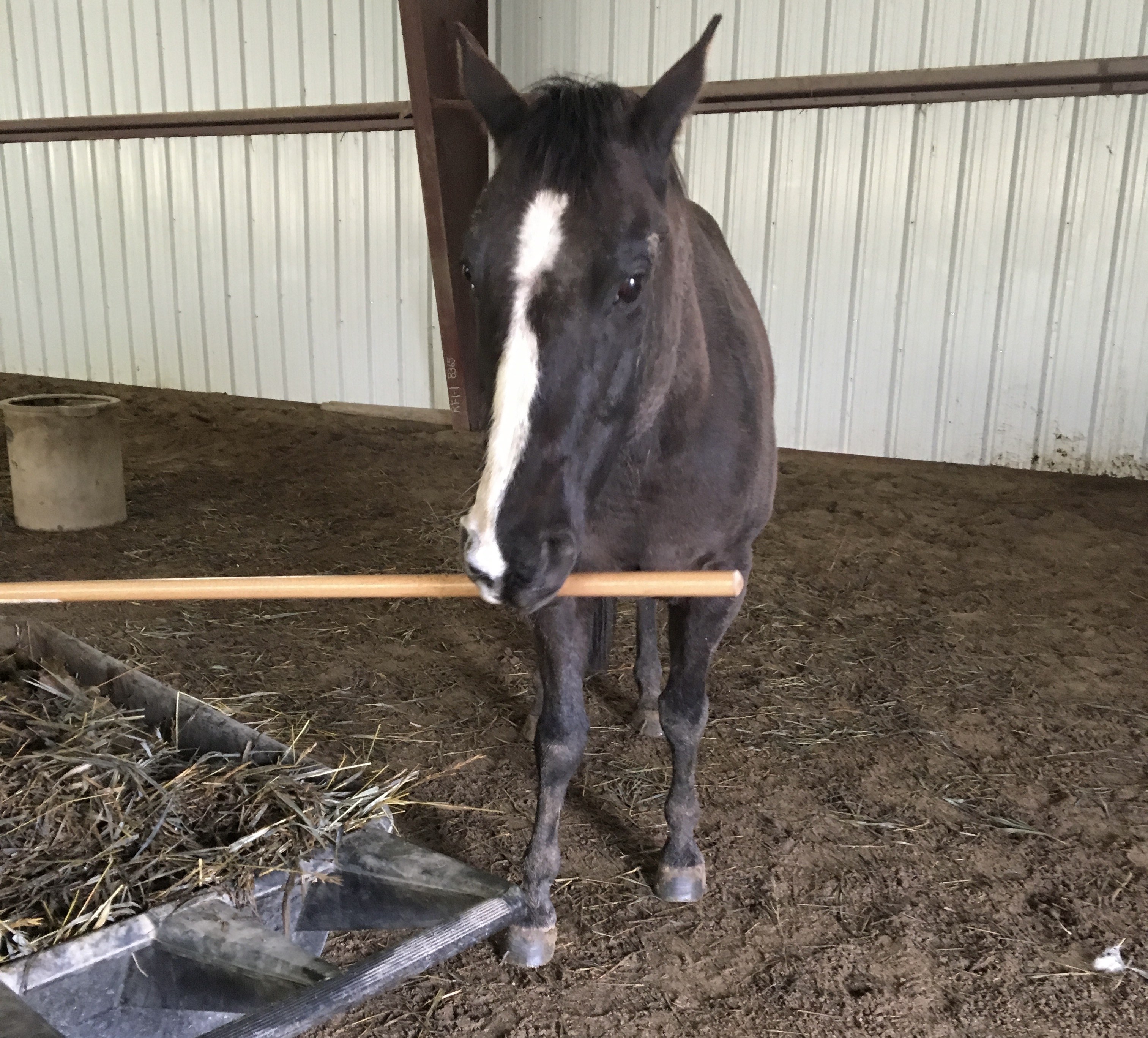 I'll always remember how Declan would put anything in his mouth. Here he assists with manure pickup.

Love your animals, every day. And when it's time, have the courage to let them go. If you need help, I'm here. And I know exactly how you feel.