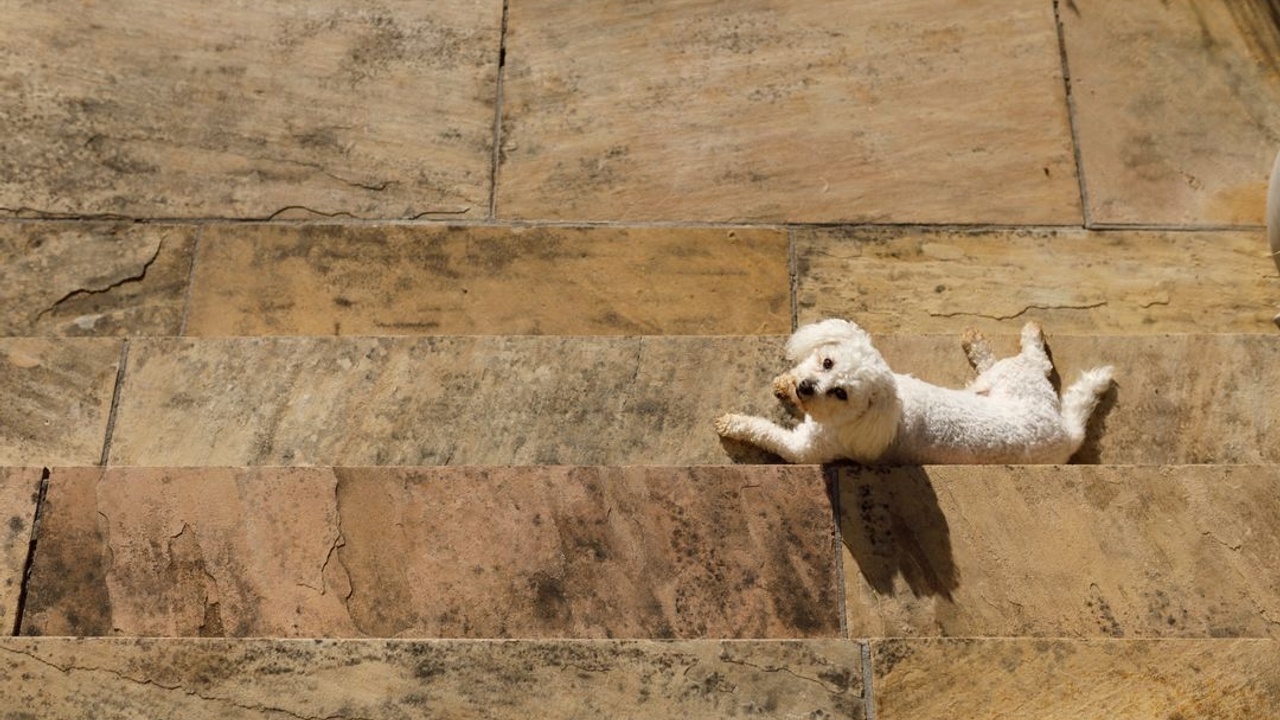 My parents always had pets. My mom talked about having chickens when she was a kid (and this was during the depression, so we won't talk about what happened to those chickens - but this was before the kind of freezers and stuff we have today). The first pet mom and dad had together was a scrappy old white cat named Pinky. I don't know how old Pinky was when I was born, but he looked like he was about 95 by the time I was a toddler and keyed in on him. They also had a dog named Skipper, but I don't really remember him. I've seen pictures.

The first dog I really had a relationship with was Cinder. We had him for quite a while. He was some sort of Labrador mix, and had a big knot in his tail where it got smooshed in the screen door when the wind grabbed it away from us. (The door, not his tail.) That tail was like a whip, and when he wagged it, which was most of the time, we quickly learned to stay toward the front of his wiggly, happy body. 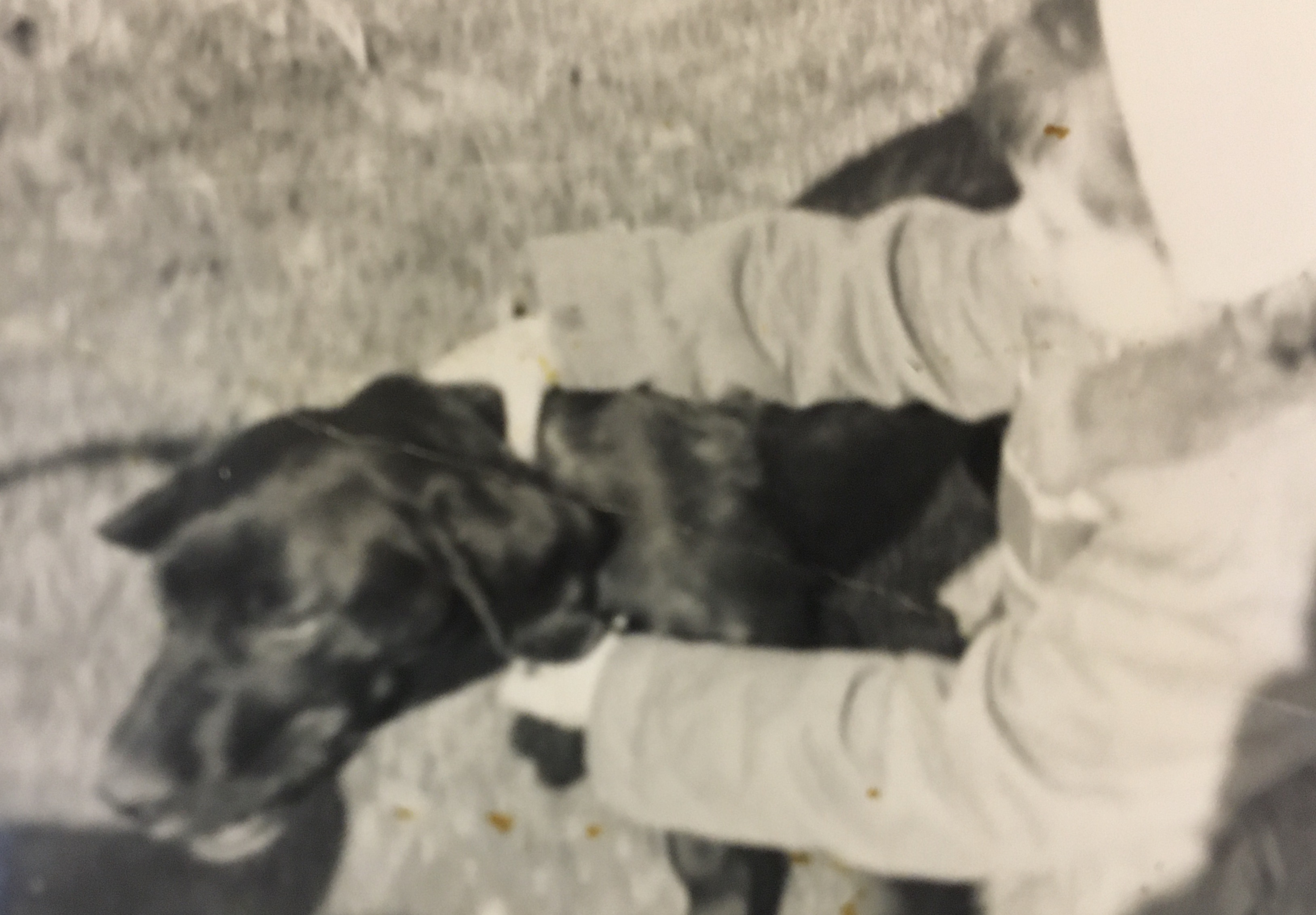 Cinder's main claim to fame was his absolute adoration of all things nautical. My grandpa had a cottage on the Fox river; that was where we spent most of our vacations, and we always took Cinder with us. He loved, loved, LOVED to ride in the boat, and when we didn't take him with us, he would just jump in the water and follow us. He never gave up, either. One time we were actually using a small outboard motor to putt-putt our way down the river to a little town, and Cinder had to stay home, because we were going to be spending some time in said town. Cinder leaped into the water seconds after we pushed off, and swam after us. He became a tiny little dot in the water as we pulled away, and he never stopped following. We went back and got him, because none of us wanted his drowning on our conscience. He got his way. He came to town, sitting proudly in the front of the boat, sniffing the wind and making sure we were all safe.

Dogs and cats came, and dogs and cats went. I used to know all the cats' names, but after 20 or so they started to blur together. The dogs, too. When we moved to 17 acres outside of Kenosha, it was like we all died and went to heaven. Dogs! Cats! And unfortunately, traffic. We lived on a country road, but it was one of those busy country roads, and even back then, people really did drive too fast. More than one of our pets became a spot on the tarmac, because this was back in the days when our dogs could wander around (and don't even TRY to put a leash on a cat).

As we kids grew up and moved away, the pets became more of a focal point for my mom and dad. Dad, especially, was very fond of dogs, although he'd never say that out loud. Very stoic, my papa. However, there was one dog of whom he was particularly fond - it may have been Kitchen. He always wanted to name a dog Kitchen, and I think he saved the name up until the right dog came along. Kitchen came to some sort of untimely end - I don't know if he was hit by a car, had an illness, or what - I was living in California by then - and my dad proclaimed "No More Dogs!" 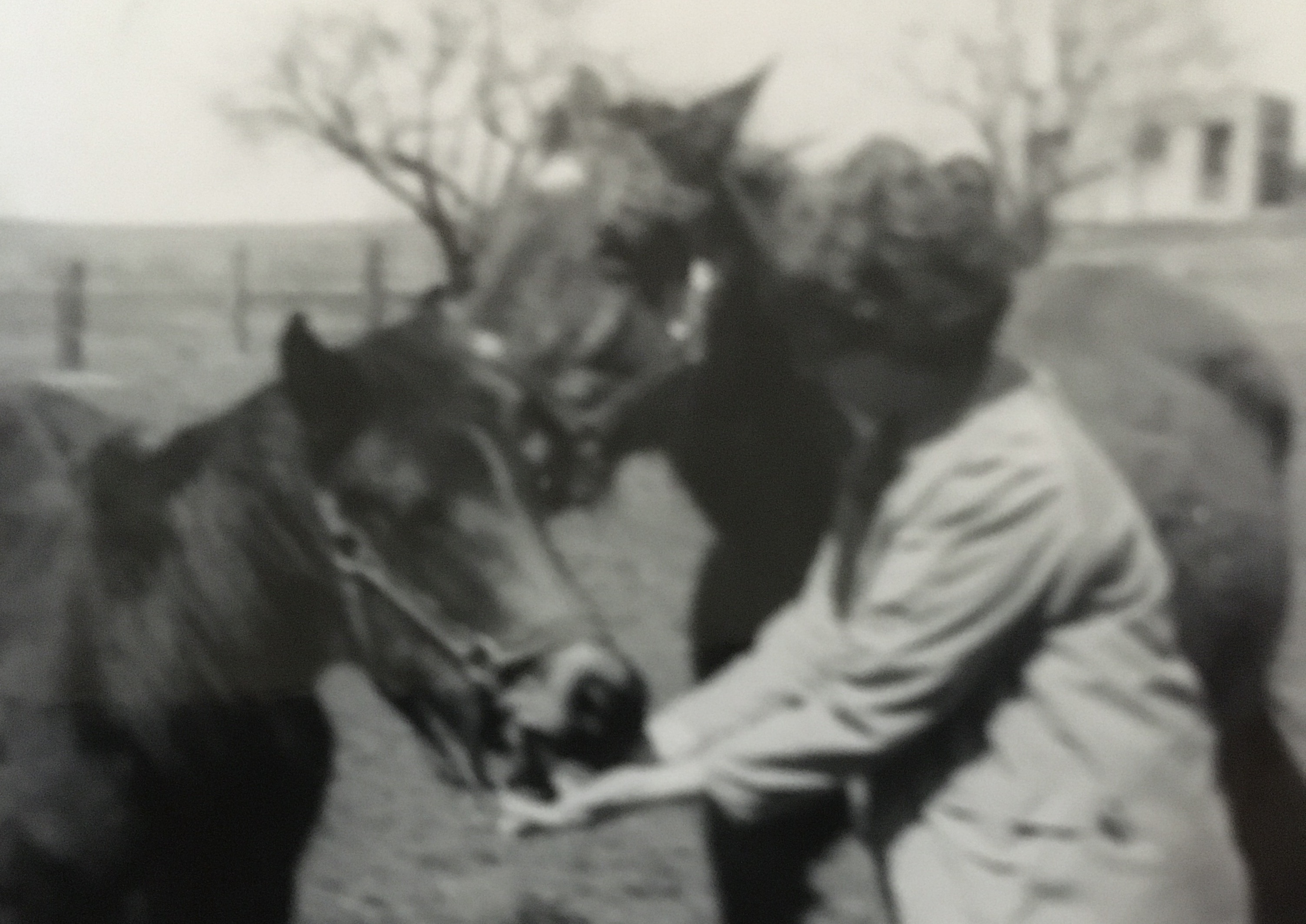 Mom with Faline and her foal Marty, who mom treated like a dog (bad idea!)

My mom was devastated. Those animals were the other kids she never had. She had always wanted a big family, and ended up with only two human kids (and never complained about wanting more - it was just a sadness in her that I never understood - until now. And I do mean right this minute.) Being a good woman, she respected my dad's wishes. She knew him well. She knew how much Kitchen had meant to him, and his way of dealing with the grief was to make sure he didn't give his heart away again. I think she also knew that he wouldn't deny her something she so very much wanted, if it came to them in a roundabout way.

Being a devout Catholic, my mom got the prayer wheel going - "Lord, I miss having a dog so much! If I'm meant to have a dog, please send me one." I don't know exactly how many times she said that prayer, but I think it was only once or maybe twice, because she told me that not long after that, a miracle happened. She went over to their church (just down the road from the house), and there, sitting on the front steps, was a dog. Mom said hello; the dog said hello. The dog seemed to indicate this was no chance encounter. No identification, no way of knowing where the dog was from. It just appeared. And it didn't leave, until it left with my mom. Dad couldn't argue with that, and they once again had a dog.

Miracles do happen. All we have to do is ask, and if it's part of the plan, it happens (and it usually is part of the plan). So maybe my mom didn't have lots of human kids, because she was mean to instill in me a vast love for the other species on the planet. She was certainly the kick start to who I am now. Her deep love of animals was passed on to me - even my dad and brother weren't immune to that kind of love. My mom helped us all. And her reward? A little dog, sitting on the church steps, waiting for her when she most needed it. Miraculous. 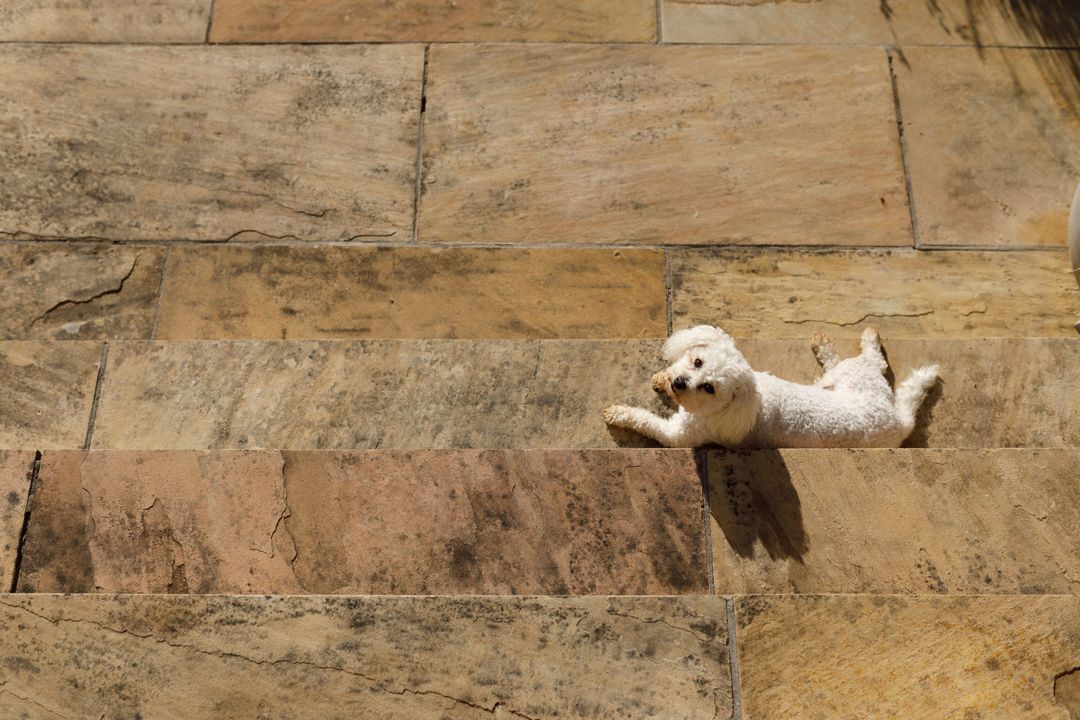