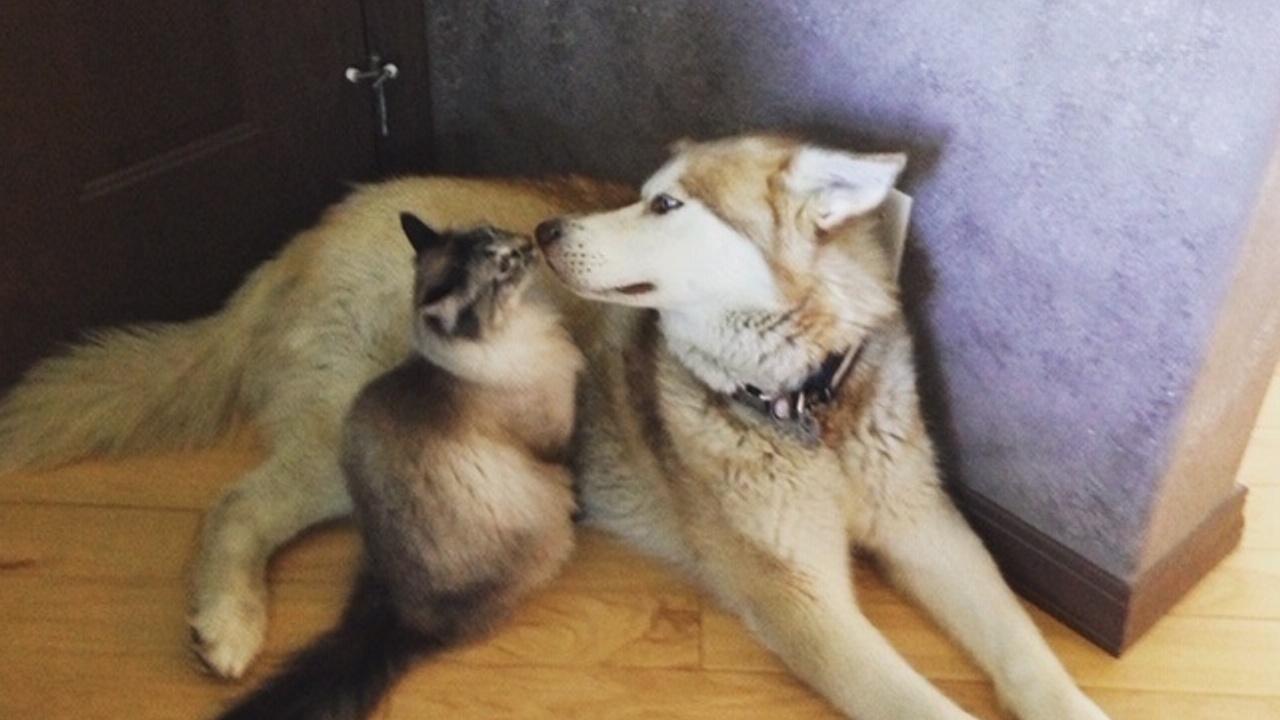 Sounds like an oxymoron, doesn’t it? Cats. Leashes. Those are usually terms one would not use together in a sentence (or a blog title). However, cats can learn to tolerate (I’m not going to use the word “like” or “love”) being in a harness and leash, especially if there’s something good that comes out of it.

You must stay within the bounds of the fenced property (since the fence is six feet tall and mesh, there’s not a lot of kitty incentive to bail into the roadway. Just too much work.).

You must come when called. Believe it or not, they adhere to this rule. It’s occasionally in their timeframe rather than ours, but the end result is the same - cat in house.

When we go to bed, all furry noses are in the house. And only one of our five cats is actually allowed out after dark, because she has a) lots of experience being outside, having been someone who lived under a deck by herself for the first few months of her life) and b) she carries on something chronic if we don’t let her out to hunt (she does bring gifts back), and does double duty on clawing the loveseat until we relent. She is required to come back in before we head off to bed. All furry noses are in the house at bed time, hers included. 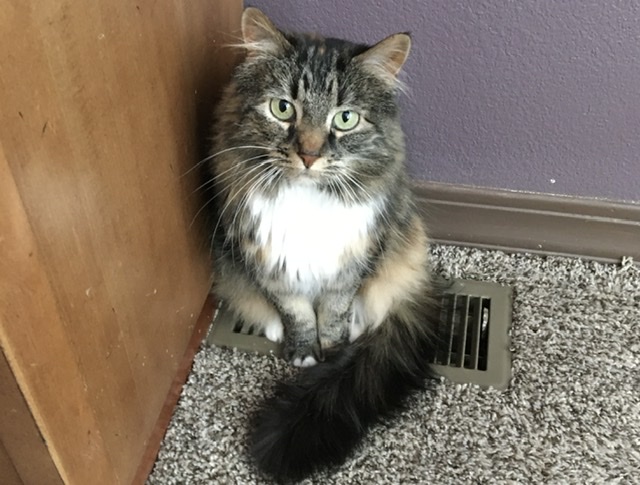 Torbie of the clan MouseKillers. Looks sweet and innocent, doesn’t she?

These are pretty easy rules to follow, and they’re good about it.

My cat Ry (ree, and one day I’ll tell the story of how he got his name) doesn’t usually stay out long anyway, being a poor to middling hunter and pretty invested in his creature comforts. However, I would love to take him on car trips, and to do that, he needs to wear a harness. 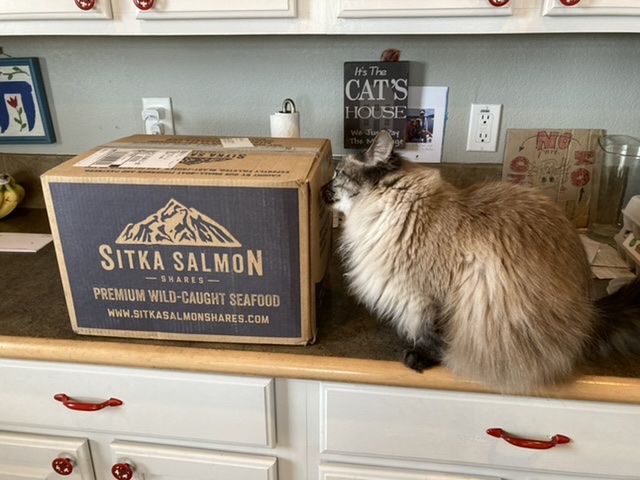 When I first let him out the front door (that is “outside” - the catio is the catio), I had a harness for him to wear, and he went out on a leash. He was new to being outside, and there was no way I was letting my baby out with Torbie-of-the-clan-MouseKillers without protection. She would have led him into the underbrush on the far side of the property and left him there. She has a fairly low opinion of anyone who can’t catch their own meal when necessary (or just for fun). Since I get most of our food from the grocery store, I can imagine what she thinks of me. Too bad. I have the canned cat food opener (to which she responds like Pavlov’s dog. She may love to hunt, but sometimes it’s okay to just hunt the can.).

Nowadays, Ry goes out sans harness/leash, and usually dashes off the deck, does a quick turn through the bushes, and then parks himself under the deck until someone opens the door to let him in. If we take too long, he meows. Pitifully. In the world of mighty cat hunters, he’s right there on the bottom. But I love him like that - he keeps himself safe.

He’s also a bit timid around strangers and new things, so to get him accustomed to the idea of traveling in the car, we’re starting with getting him used to a new harness. It’s bright green, and he looks very handsome in his getup. He’s been wearing it around the house and it seems it is an okay piece of clothing. Since the last cat who agreed to wear a collar has passed on, none of the cats have clothes. Except Ry and his harness. 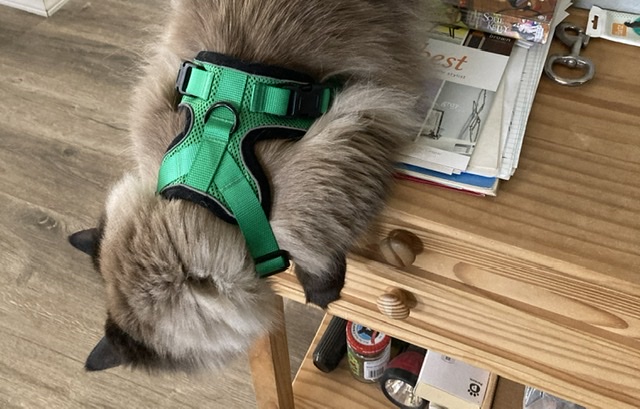 Ry sporting his (very attractive) harness while watching Hazel the Roomba go by.

We’ve also taken a few turns around the house with the leash attached to his harness. There’s an art to walking a cat. It mostly consists of going where they want, with gentle nudges in a different direction if they try to, say, get under the couch. Ry is getting quite good at accepting my suggestions.

Pretty soon we’ll go outside and do the same thing. Maybe I can convince him to take a turn down the sidewalk instead of through the bushes. And then - the car.

His last trip in the car was to see a vet about an eye, and it wasn’t the best of times for Ry. The vet, however, did give him all A’s in the “good kitty” department. No scratching or biting, and he submitted to being poked and prodded, if not with good humor, at least with detached suffering. (His eye is okay, for those who wonder). So I want his next trip in the car to be more fun. Maybe we’ll go someplace nearby, park, and he’ll get a treat while being able to look out the window. Longer trips will ensue.

Why all this prep, you wonder? What’s the point?

I want to be able to take him on trips with me, like over night. I have family in Wisconsin, and am planning a trip out that way later in the year. I love road trips and don’t necessarily want to go by myself, and my loving husband may not be able to join me. So - in steps Ry, who is very good company as he is quite chatty, and very affectionate. I can just see him keeping up a running commentary as we tootle across Kansas on the way to Wisconsin.

Dogs are not the only animals who can be trained to be on a leash and harness. When you have a cat who will calmly accept the harness (we’re not there yet - Ry really knows how to make his bones melt when it comes to harness time), and will go happily on the leash (he does like that), you’ve accomplished something. Dogs are easy. Cats, not so much. So feel good about that. And then try harnessing a pig.