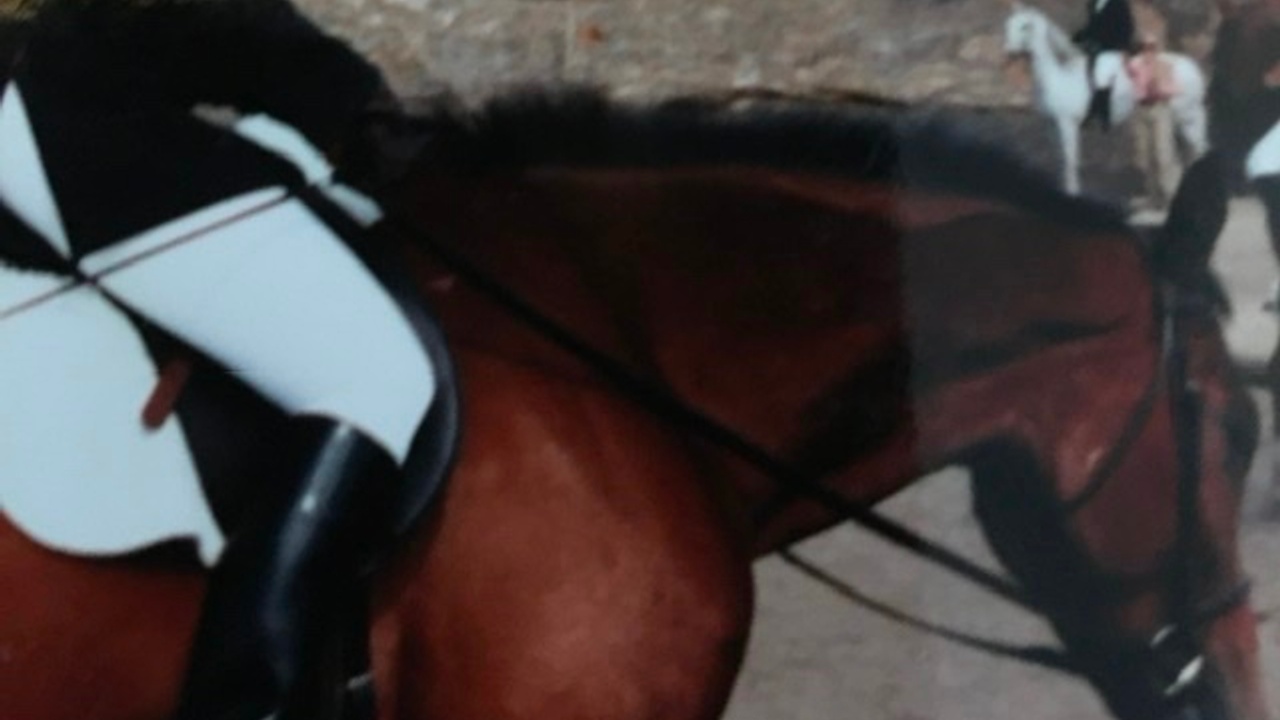 Cabe came to me around 1982. I had another horse, Mei-tu (and I suppose I’ll write about him at some point, since he taught me tons), but Cabe just stole my heart. He stood in a stall and run, all legs and gawkiness, a beautiful bay with a white star on his forehead. I found out he was for sale. OMG. Totally untrained. But so sweet. I talked to my then-husband (not the one who has been with me now for over 30 years and would just smile like a shark and let me dig my own hole - no, this guy liked control), and he said I could have Cabe if I got rid of my other horse - after all, I only had one bum, and who can ride two horses at once? (Not me.)

I found a buyer for Mei-tu, and it was a match made in heaven. The guy LOVED him - and Mei-tu liked him, too, which was saying a lot because he generally didn’t like men.

Cabe became mine. Of course, he didn’t have a name. I got to name him. This was back in the days before I started asking my animal friends what they’d like to be called. So because he was beautiful and elegant, and had a white star on his forehead, I named him Coalibay, after a horse in a story my dad used to read to me. Cabe for short.

The people who sold him to me said he was three years old. Liar, liar, pants on fire. I found out later, after I had spent a lot of time getting him used to the saddle and a bridle and getting him backed and started riding him around, that he was probably only two when I bought him. I felt really bad about that, because I’m the type who likes to take things really slow, and I like to let my horses grow up a bit before asking them to carry someone around. (Ask LiLi - she had some basic training as a five-year old, and didn’t become a horse you could actually ride until she was almost 11. Yeah, that’s a little excessive on the conservo-meter, but she was a cat in a horse suit. I wasn’t messing around with THAT. She has now figured out she’s a horse in a horse suit, so she’s stopped trying to act like a cat - thank goodness!) 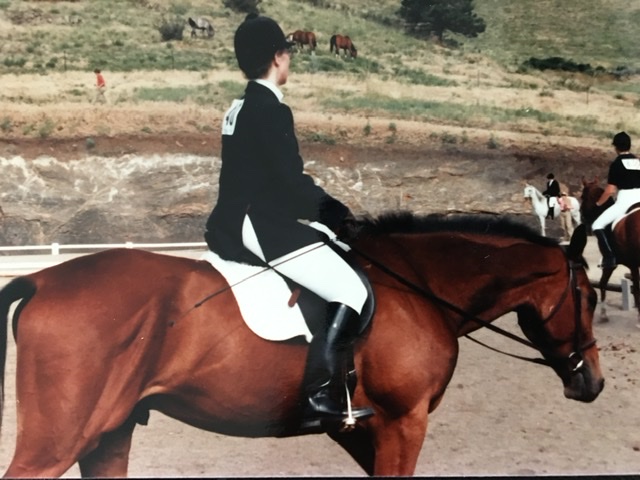 Cabe took my amateurish attempts at training very graciously. He was so awesome. We had good times together. I took him to riding lessons in a little sportster trainer. That’s a trailer with a half-top, and to see him in it was pretty funny. He wasn’t huge, maybe 15.3 when I had him, but the trailer was, especially by today’s standards, tiny. It was six feet high, and not too much longer than that, so when he got in with his long neck he had to turn his head slightly sideways to fit. Fortunately, we never went any great distance in it.

He got used to the ways of a  trailer by being fed in it. He went comfortably in and out; the only thing he had to learn was to go in willingly when we were going somewhere.

The first time we tried that, he looked at me like I was nuts. “Where’s my food?” He seemed to ask. “I don’t see it on the floor of the trailer like usual. Get in NOW? Why?” Fortunately, he was laid back about pretty much everything, so he never asked any of these questions with wild eyes, but more like a middle-aged human who can’t quite figure out what’s going on but is willing to go with the flow. No amount of coaxing (and I was by myself) was getting him to load. So I got out a long line, hooked it to one side of the trailer, laid it in a big loop on the ground behind the trailer and put the other end through a window. It’s called a butt rope. I led him to the trailer, placed the butt rope around his butt, and held on to one end of the rope and his lead rope (also fairly long and trailing through the same window), and gently nudged him. This doesn’t work with every horse, so kids, don’t try this at home without some supervision.

He stood there. I waited. Nudged him with the rope again. Horses are really good at the waiting game, but on that day, I was better. Somewhere along the line he realized he couldn’t escape (he could have easily, but thankfully he wasn’t that kind of horse, and everything we did that day was totally low key), and he got in the trailer. I guess we had a pretty good rapport. From that day forward, if he wasn’t feeing the trailer vibe, all I had to do was get out the butt rope and lay it on the ground. In he’d go, knowing that if he was going to do “battle” with the butt rope, he was going to lose.

Back then I wasn’t all that smart, and I let Cabe go because of yet another (human) guy - I was spending all my time being enamored and had less and less time for my horse, so I sold him to someone who was going to train him to pull a carriage. Apparently it didn’t work out - the first time they hooked Cabe up to the training cart, he got scared and broke both the cart and the trainer’s arm. End of carriage horse career. After the breeze he had been to train to saddle, all I can think is that their techniques were more of the hurry up variety, and after my long-term-take-it-slow approach it was too much for the boy, and he blew a fuse. 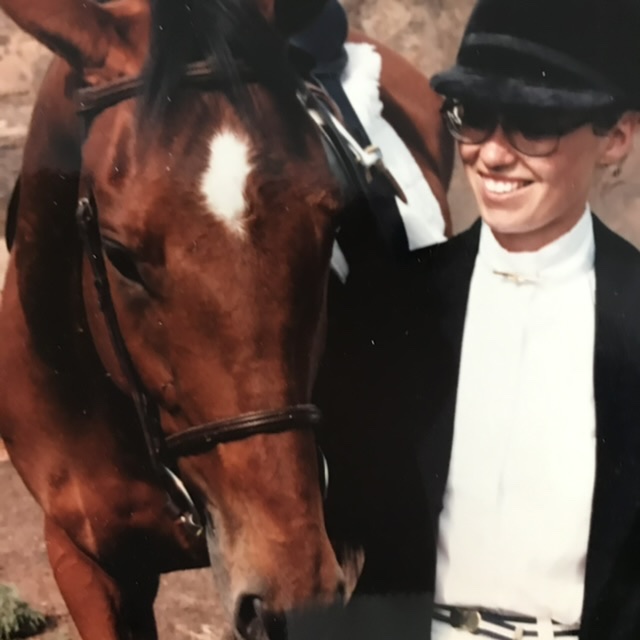 I did try to find him again - the carriage people sold him to a high school girl. I think I tracked him down, but he was changed. He looked so different - taller (since I sold him before he was full grown), and he had a problem with his back. But I’m pretty sure it was him. He had a very distinctive sworl on one side of his neck, and that white star on his forehead! I couldn’t really afford to buy him back when the girl was ready to let him go, and I’ve always regretted it. I’m a different person now, and the horses I take on, unless they indicate they want to go somewhere else, stay with me for life. I threw Cabe away.

I imagine I’m not the only person with a story like this. We live. We learn.  We do the best we can with what we know in the moment. We ask forgiveness. And it does come. We also have to learn from our mistakes, and forgive ourselves.

I hope someday he’ll come back to me (and maybe he has but I just haven’t figured that out yet), and if he does, I promise you, dude, it’s you and me for the rest of your life.